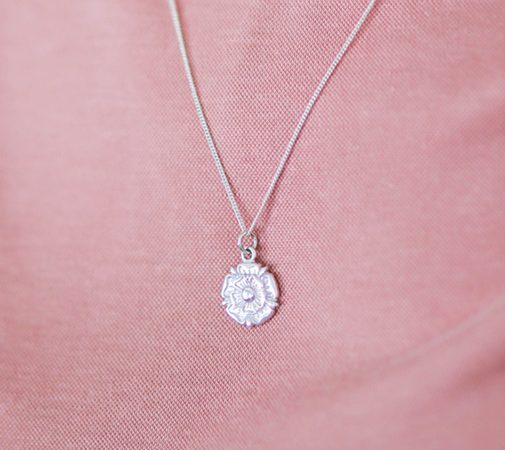 Westminster Abbey’s gift shop asked us to create a Tudor Rose charm. The Tudor Rose is the floral emblem of England, and is probably the most famous flower in heraldry.

It dates from the Tudor dynasty who ruled the country from the late fifteenth until the early seventeenth century. The flower, also called the “Union Rose”, is usually depicted as a double rose, white on red, with five petals of each colour and five green barbs, and golden-coloured seeds at its centre.

What’s the significance of the Tudor Rose for Westminster Abbey?

In 1503, Henry VII commissioned the Lady Chapel in Westminster Abbey. It was eventually to become the site of Tudor tombs, including Henry’s wife Elizabeth of York, his mother Margaret Beaufort, and Henry himself. Sadly he died in 1509 so didn’t see its consecration in 1516 (this year marks 500 years since this ceremony).

The Lady Chapel is a real masterpiece, renowned for its highly decorative fan-vaulted ceiling. The chapel’s intricate architectural details include portcullis designs (a heraldic symbol Henry inherited from his Beaufort ancestors) – and Tudor Roses.

Why was the Tudor Rose so important to Henry VII?

The creation of the Tudor Rose is a fascinating account of late medieval PR. When Henry Tudor won the Battle of Bosworth in 1485, he defeated the reigning monarch Richard III and overthrew the House of Plantagenet. To legitimise his claim to the throne, the new King Henry VII made a wise marriage – and made clever use of heraldic symbols.

The House of York, the Plantagenet royal family, had used a badge of a white rose. The House of Lancaster, from which Henry Tudor was descended, had a red rose emblem. In practice, the red rose had been rarely seen, as most of the Lancastrians had preferred a golden rose or even an antelope for their badges. Henry himself, a good Welshman, fought under a red dragon banner.

In 1486, Henry married Elizabeth of York, daughter of Edward IV and niece of Richard III, bringing the rival royal houses together. Seeing a nice opportunity for some unifying symbolism, Henry created the Tudor Rose by combining his bride’s white rose badge with the little-used – but suddenly important – Lancastrian red bloom. The two-coloured Tudor Rose was born.

Mallards’ brief was to design and make a sterling silver Tudor Rose commemorative charm for Westminster Abbey’s gift shop. We had to make sure that it clearly resembled the Tudor Rose without using the famous contrasting colours.

The masons who worked on the Lady Chapel had the same challenge; and like them, we made sure that the shape of the double bloom was strong, and distinctive. The five barbs and double rose shape, which we recreated in faithful detail, make it clear that the charm is this particular rose, not just any flower.

The finished Tudor Rose charm is for sale at the gift shop, complete with a personalised gift box and a story card about the charm’s origins. At just 2cm high, it’s dainty enough to wear on a charm bracelet, but would look equally good on a neck chain.

The Tudor Rose charm has been an excellent tie-in for the consecration anniversary celebrations. If you have a special occasion or anniversary coming up, please get in touch with us at Mallards, and we’ll work with you to produce an exclusive commemorative item. All our bespoke jewellery is designed and made in the UK, and the quality is always superb