The Christian fish is a symbol as old as the religion itself. Adopted by early followers to identify themselves, it’s now a recognisable sign of faith. We see it every day on bumper stickers, key rings, ties – and Christian jewellery.

At Mallards, we’ve designed and crafted a beautiful little Christian fish pendant. Its elegant shape lends itself perfectly to contemporary Christian jewellery – but what’s the story behind its distinctive design?

There are stories behind the symbol. The fish symbol is often called “ichthys” or “Ichthus”, from a first century acrostic. An acrostic is a form of writing, usually a poem, in which the first letter or word of each line spells out a message or another word. In this case, the phrase used was Iesous Christos Theou Yios Soter (Jesus Christ, Son of God, Saviour), which produces “ichthys”, the Greek for “fish”.
The fish symbol has another Christian significance. Christ called his disciples, four of whom were fishermen by trade, “fishers of men”. The passage in the New Testament (Mark 1:16-18) reads:

As Jesus walked beside the Sea of Galilee, he saw Simon and his brother Andrew casting a net into the lake, for they were fishermen. “Come, follow me,” Jesus said, “and I will make you fishers of men.” At once they left their nets and followed him.” 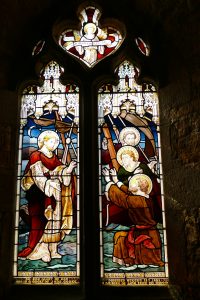 Much of the New Testament takes place around the Sea of Galilee, and is filled with evocative images of fishermen and their trade, as well famous Bible stories such as the loaves and the fishes. So, the fish symbol was a natural image for Christians to use.

Early Christians were persecuted, and ichthys became a useful secret sign. Because the fish symbol was used by the Romans themselves, among others, it attracted very little attention. Christians used the symbol to mark out safe meeting places.

If a Christian met someone whom they believed was a fellow Christian, they would draw one arc of the fish on the ground. If the other completed the outline, the two strangers could trust each other. If the second person didn’t complete the fish, the arc shape in the sand appeared innocent enough, and no suspicions were raised. Sometime around the fourth century, it became less common; and as Christianity became a more dominant faith, it was replaced by the symbol of the cross.

These days, the fish is no longer a secret sign but a proud identifier of faith. It’s often seen on the backs of cars or worn on ties or badges; and because it doesn’t have to hide, the word “ichthys” or “Jesus” is often written inside.

Aesthetically, the Christian fish is a beautiful symbol. Its simplicity and clear lines create a very contemporary-looking motif. Sleek and graceful, it’s the perfect design for modern Christian jewellery. 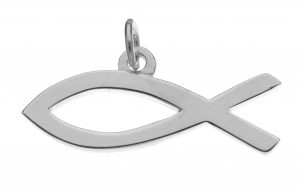 For someone looking for a discreet symbol of faith, a delicate Christian fish pendant is a clear choice. At Mallards, we recently crafted this elegant sterling silver ichthys pendant, which would make a lovely addition to the jewellery range in a cathedral gift shop. The fish symbol is interdenominational, so has a wide and popular appeal; ideal for busy heritage attractions that attract international visitors.

To find out more about our Christian fish pendant, please contact us.
We also work closely with heritage gift shops to create bespoke jewellery. If your heritage attraction has an object, symbol, or image that your feel your visitors would love to have replicated in jewellery form, please get in touch. We specialise in crafting high quality bespoke jewellery, and we also supply off-the-shelf designs such as the Christian fish pendant. All our jewellery is hand-crafted in Britain.