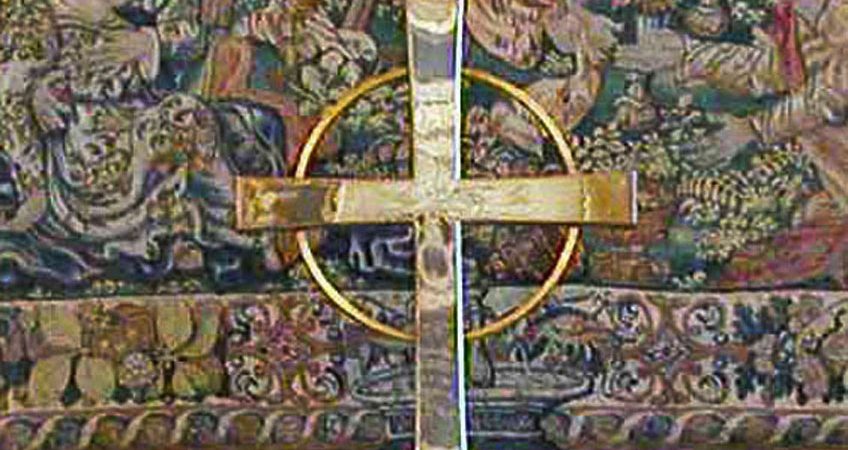 The simple yet striking design of the cross made it the perfect subject for contemporary-style bespoke jewellery. The original altar cross was made by the late Gerald Benney, influential and respected twentieth century British silversmith and goldsmith. His designs are described as having “strength and dignity, an aura of splendour without ostentation… his work is dramatic because of its simplicity and scale.” His work often has a distinctive hammer pattern, apparently discovered when he accidentally used a hammer with a broken head! The “Benney Bark Finish” was quickly imitated by others. The original cross was commissioned by the Royal Stuart Society in 1992, to commemorate the death of Mary Queen of Scots. The cross stands on an altar near her splendid marble tomb in the Lady Chapel.

This aisle of the Chapel contains the tombs of two distinguished women – the Scots Queen and Lady Margaret Beaufort, mother of Henry VII and grandmother of Mary’s rival, Elizabeth I. Even though it was commissioned for the former queen, the cross is often referred to as “Lady Margaret Beaufort’s Altar Cross”.

Mallards worked with the team at Westminster Abbey shop to create a bespoke jewellery range based on the cross. We decided upon two sizes: a pendant and a smaller charm. The graceful simplicity of the original altar cross combined with Benney’s distinctive naive finish makes it perfect for contemporary style Christian jewellery – a wonderful gift to mark a christening, confirmation, or even a wedding.

And here is the finished pendant. In sterling silver, hallmarked at the London Assay Office, we feel it captures the elegant simplicity of Professor Benney’s altar cross. A beautiful expression of faith, or a treasured souvenir of time spent at the wonderful Westminster Abbey.

Both items are available to purchase through the shop at Westminster Abbey. If you have an inspirational item at your heritage attraction – it could be a sculpture, a detail in a painting, even a unique plant! – please get in touch. At Mallards, we specialise in producing bespoke jewellery and other souvenirs for heritage retailers, all crafted in the UK.