A simple item can have a huge historical story to tell; and this heritage pocket watch goes straight to the heart of one of Britain’s most dramatic moments.  This is a fine-looking watch from the National Maritime Museum’s collection. It has some absolutely beautiful detailing; however behind its handsome dial lies a tale of war, propaganda, and naval heroism.

We’ve produced a faithful replica of the pocket watch for the shop at Royal Museums Greenwich – and as we worked on it, we became fascinated by the original object.

The watch was made in 1803 in Switzerland. It’s an open face pocket watch, with a brass case, and an enamel dial which is painted with an incredibly detailed scene of the French fleet invading England. Above the small Arabic sub-dial which tells the time is inscribed “Descente en Angleterre”, Napoleon’s plan to invade England. The French ships proudly carry Tricolour flags as they face the cannon on the English coast. The English appear to be losing however, as the coastal fortification is on fire. It was every Englishman’s worst nightmare.

Whichever side you were on, this watch would either stiffen the resolve of the English that this must not happen, or spur the French on to pursue invasion. Propaganda is not a new invention, and both sides in the Napoleonic wars made great use of art, literature, and items such as medallions and this watch to promote their cause to their countrymen. Napoleon in particular was a master of the public image. Nelson’s image as national hero was earned, but also promoted. As we know, the threatened French invasion didn’t happen; and two years later, Nelson won his decisive – and final – victory at Trafalgar.

The watch continued to be used after Trafalgar, and was obviously well thought of, as the mechanism was replaced at some point. The fascinating little automaton ship in a half-moon-shaped aperture is not part of the original watch – it really does not sit well with the design, and it’s crudely cut. The little ship itself was cut from a late nineteenth-century watch dial. The painting is in lovely condition, with the colours still splendidly vivid, and none of the artist’s painstaking detail lost.

The reproduction pocket watch Mallards produced has had to make a few minor changes, as we wanted it to be a working pocket watch as well as a replica. We’ve added a pair of black spade hands to the centre of the dial, while keeping the small subdial as a faithful detail. The ship in the later aperture doesn’t bob up and down, but we’ve still included it to create an accurate-looking reproduction. 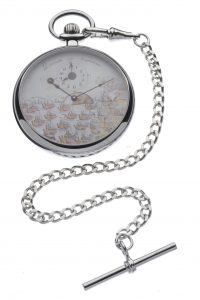 Brass is rarely used for pocket watches these days, so we’ve gone for two popular contemporary finished. The pocket watch is available with either a gold plated or chrome plated case, and both finishes come with a matching Albert chain. The painting of the French invasion has reproduced beautifully, and we’re really pleased with the final effect.

The heritage pocket watches will be available at the shop at the National Maritime Museum. The original watch is not on display at the

moment, but if you’d like to know more about this object or others in the collection, contact the Museum.

If there’s an object in your collection that you think would make a suitable item for retail, please contact us at Mallards. We specialise in reproducing heritage pocket watches, jewellery, and other mementos for historic attractions and museums.